On 04 January, YouTube user and researcher UFOvni2012 posted a very interesting –yet eerie video in which he claims that otherworldly entities are behind the catastrophic wildfires that have devastated Australia.

The video, which has more than 6,500 views, explains that an Australian farmer called Craig Calvert and his friend photographed a creepy face among the smoke. “According to local media reports, Craig Calvert, shared the photo that shows a creepy, devilish face among the smoke from the fires in East Gippsland County”, the video states. “He said he was really surprised after seeing the photo”, it continues.

“I am not really interesting in creepy things, but there is a big demon face right in the fire”, Mr Culvert asserted.

The fires started in October, and have burned more than 40 million hectares since then. Also, 17 people have died and 28 have been reported missing.

However, in the opinion of renowned UFO researcher and writer Scott C. Waring, of UFO Sightings Daily, what appears in the photo is not a demon, but an alien entity. “Now this is something that just blows my mind. A person was taking photos of the horrendous wildfires in Australia and caught a face poking up from the ground”, he said. “It looks like a devil, but I believe it’s an alien that is in an underground base about 6 kilometres below the surface who is really seen here”, he affirmed.

Mr Waring believes that this image is evidence of the power of alien telepathy. “His [the alien’s] thoughts and concerns are visible in his face. You see, aliens can use the power of the mind to see what’s going on at the surface”, the American ufologist expressed. “His thoughts accidentally caused the smoke to take form of his face while he was in his meditative state. Smoke is the lightest and easiest form of matter for a telepathic to manipulate. The alien didn't mean to create it; it’s just that his thoughts are so powerful that the clouds moulded around his telepathic projection unintentionally”, he explained. 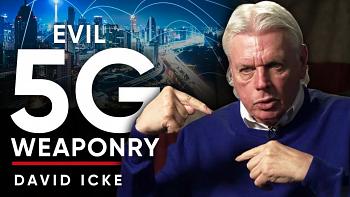