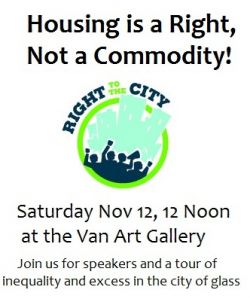 VANCOUVER (Dominionpaper.ca) -- On Saturday November 12th we will get back in the streets. Banking and housing deeply effect us in Canada, but this is nowhere more true than in Vancouver. Every day, renters are evicted and existing housing is demolished in order to keep prices high for the real-estate industry and the Big Five banks that finance them.

As we saw with subprime mortgages in the United States, housing finance targets poor, low-income and working people who can no longer subsidize the housing bubble. As the Bank of Canada states, Vancouver is “ground zero” of the housing bubble[1], while inequality is etched onto the landscape of the city. Day after day, gentrification in Vancouver is like another subprime mortgage crisis, but instead of targeting individuals it targets entire neighborhoods: areas with the largest stock of desperately-needed affordable housing are being callously bought up because they yield the highest margins of profit for developers.

Development and banking are the only monopoly industries in Canada that yield a 25% profit rate. In order to understand how the 1% reproduces themselves in Vancouver, we will march to key Downtown sites of Vancouver’s housing/finance complex. Locations will include: sites where social housing was promised but never built, headquarters of Vancouver’s largest developers and marketers, and historical and architectural sites important to the housing movement in Vancouver. On Saturday we will continue the class struggle for housing. RUN ON THE DEVELOPERS!

Join the Vancouver Media Co-op today. Click here to learn about the benefits of membership.