Ottawa parents accuse a travelling U.S. talent agency of misleading them about an affiliation with Disney Channel.

Model and Talent visited Ottawa on Valentine's Day weekend to hold auditions. The agency, which is based in Las Vegas according to its website, held the first casting call at a downtown Ottawa hotel on Saturday.

"If you want to be on the Disney Channel or a TV show like Austin or Alley or Dog with a Blog, be one of the first 200 callers right now," said a radio advertisement, which aired on an Ottawa private radio station.

That's what Louise Belisle said she heard, leading her to attend the audition Saturday with her five-year-old son, Liam. However, she soon left the casting call upset.

"I'm very concerned now. It implied to me it was connected to Disney," said Belisle, who went on to say she might file a complaint.

The call-backs were scheduled to take place on Sunday and some parents and children left the audition satisfied with their experience. Others said it was not what they were expecting.

When reached on Saturday, Disney advised it had no association with the company Model and Talent or any other agency that asks for money in advance.

"Disney Channel is not affiliated with any advance-fee agency, acting school or acting workshop and has not authorized talent searches through such entities including Model and Talent in Ottawa," read a statement from Patti McTeague, senior vice-president of communications at Disney Channels Worldwide.

The statement also said Disney has received complaints about "agents" that advertise with the "promise of an acting job for kids on Disney Channel."

"The complaints are that the radio spots, recruiters and the organizers themselves mislead parents into paying an advance fee ranging from hundreds of dollars to $10,000-plus," it read. 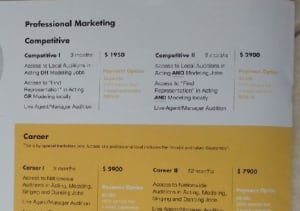 This page obtained from a Model and Talent form says parents would need to pay anywhere from $1,950 to $7,900 to help their child appear on a Disney Channel show. (Submitted photo)

A pamphlet handed to parents, and obtained by CBC News, outlined payment plans that claim to help children find acting jobs. The costs range from $1,950 to $7,900.

Model and Talent refused to allow CBC News into the casting call, but did send a statement clarifying it has no association with Disney.

"We are not affiliated with any network, but aggregate thousands of castings from across the globe in one centralized network," the statement read.

Disney said it informs parents about authorized open casting calls through its website and public service announcements on Radio Disney, which also clarifies the casting process.