Iranian President Mahmoud Ahmadinejad’s scathing attacks against Israel and his repeated denials of the Nazi Holocaust is an apparent sham. This sham is orchestrated to bolster the need for the U.S. political-industrial-complex to have an “enemy”.

The threat of World War III is real. But, not from Iran.

A British newspaper examined the Iranian leader’s identity card which he displayed in public during his country’s elections in March 2008.

The ID card bears his family’s original surname, Sabourjian, which is a Jewish name that means cloth weaver, according to The Daily Telegraph.

The Sabourjians have historically been concentrated in the same region of Iran where Ahmadinejad was born, according to the report. 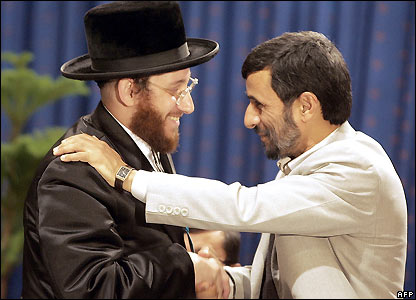 Ahmadinejad’s identity papers indicate that his family changed its name and converted to Islam after he was born, the British newspaper said.

Judaism is not only a religion, but also a race.  Ahmadinejad cannot "renounce" his Jewish race any more than Denzel Washington can renouce his being black.  It is apparent that Ahmadinejad spreads his inflammatory rhetoric in belalf of the Zionist-fringe of Judaism.

The Zionist-fringe of Judaism are essentially archons who collaborate on deceptive plots toward the orchestration of a New World Order.  Please "Google" Dr. John Lash's metahistory.org website on his detailed references about his own insights on the 'archons'.

It is apparent that the constant verbal assault against Israel and Jews is being orchestrated by a broader archon syndicate that presides over both the Anglo-American empire and Russia.

Mahmoud Ahmadinejad appears to be directed by the same apparent clique that manipulates world leaders in general into an artificial state of enmity in front of television cameras.

Mahmoud Ahmadinejad is as much a employee of the New World Order cadrae, as are the architects of the War on Terror. Al Qaeda as revealed by the NATO-backed Al Qaeda government in Libya, is also part of a charade of international agent provocateurs.

Iranians and other Muslims want peace.  The overwhelming majority of Jews also want peace.  The Jewish community of Persia, modern-day Iran, is one of the oldest in the Diaspora, and its historical roots reach back to the 6th century B.C.E., the time of the First Temple. Their history in the pre-Islamic period is intertwined with that of the Jews of neighbouring Babylon.

As David Icke says, we, as Jews, Muslims and humans, need to "wake up" to machinations of the "divide and rule" politics of archon controllers and their operatives.

Ahmadinejad’s relatives once told the British paper The Guardian that the family had changed its name for “a mixture of religious and economic reasons.”

7 Questions to Ask Before Refinancing a Mortgage

What Can I Do With a Finished Basement?...

What Type of Fire Safety and Protection Equipment Do I Really Need?...

Advice for Starting a Business During Lockdown...