Drawing room conversations sometimes tend to broach solemn subjects for leisurely discussion. But how many of them are supported by facts? If I were to say that global poverty is on the rise, you could doubt such an off-handed statement. However, you would be wrong because this is a cold, hard truth. Let’s back it up with some numbers, and you’ll see. 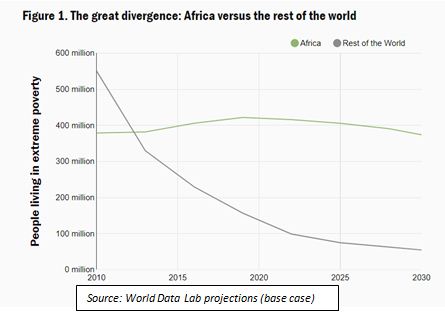 Poverty has a set definition in Economics, where experts line up to argue about the various causes and types of poverty prevalent in society. If asked, some of them will probably try to point out that poverty is on the decline in several countries in the world, and a considerable dip is expected further in the next decade. Indeed, recent numbers have somewhat improved. For example, in India, one of the largest countries in the world, the extreme poverty rate of under 3 percent is likely to be achieved by the end of this year. According to another estimate, worldwide trends also indicate a decrease in the number of people living in extreme poverty, from 600 million at the beginning of 2019 to approximately 436 million by 2030.Butthese numbers notwithstanding,the World Data Lab points out that nothing can detract from the fact that Africa, especially sub-Saharan Africa, is the biggest threat to eliminating poverty in the world today. 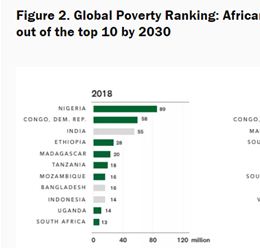 Now, back up these charts with a recent study on rethinking global poverty reduction which categorically stated that the rate of decrease would be slower in the next decade. And the reason, according to Homi Kharas, Kristofer Hamel, and Martin Hofer in an article published for Brookings, is that Africa not only records a stagnant poverty reduction rate but is currently adding more poor people to their numbers. So, while 5 years backit was home to about 50 percent of the global poor, the numbers have increased to 70 percent in 2019 and are expected toexceed 80 percent by 2023.

So much for statistics. People still tend to downplay the situation scoffing at the numbers. They try to quote relative poverty concepts and figures to dismiss the shadow of grim reality that extreme or absolute poverty casts. But how can one ignore this in good conscience? In the words of the former president of the World Bank, Robert McNamara – "It is a condition so limited by malnutrition, illiteracy, disease, squalid surroundings, high infant mortality, and low life expectancy as to be beneath any reasonable definition of human decency."

And there lies the crux of the matter. The factors that Robert McNamara enumerated are all present in Africa in multiple permutations and combinations, more than anywhere else in the world today. Thus, the UN uses the multidimensional poverty index (MPI) to understand poverty, moving beyond the income factor and incorporating the three key dimensions of health, education and standard of living.World Vision brings some facts to our notice from the 2018 survey by the world body which pegs almost 1.3 billion of the world population in 104 developing nations to be living in multidimensional poverty, out of which 660 million affected are children. The implications are chilling.

We don’t have the luxury to sit in the comfort of our home and cite these statistics occurring half a world away. The former Secretary-General of the UN, Kofi Annan, hit the nail on the head when he said – “Extreme poverty anywhere is a threat to human security everywhere.” It may seem a simplistic commentary but remains an unpalatable truth, all the same.

Wars, conflicts and skirmishes in the name of territory, ethnicity, and religion that rage around, along with blatant corruption at the highest levels of the government, are the direct factors contributing towards poverty. If the powers mandated to ensure the welfare of the people are not interested in doing so; if, funded and abetted by the profiteering “sympathetic businessmen”, warmongering fanatics care more about grabbing power and lust after enjoying the corrupt benefits from being in control, how can the common people expect to be free from the clutches of generational poverty?

Those with vested interests in prolonging a state of war and conflict in the underdeveloped and developing nations and fuelling anarchy, chaos and instability, continue to do so unhindered. No positive steps are taken to find ways to create abiding peace. There are no accords to fulfilling of achievable and practical roadmaps and milestones of development and progress. I don’t see an end to the vicious cycle as the present scenario stands, where each evil feed off one another and keep the yoke of poverty that crushes the common folk going on.

There have been some suggestions on how to accomplish poverty alleviation, and the most popular proposition is to strengthen the programmes for humanitarian aid. Honestly, intent isn’t enough to make such programmes realize maximum reach to the poverty-stricken multitudes. Without local government involvement and support, there are inevitable roadblocks, the benefits seem too few too late and the progress is sluggish and falls short of any promise of making a difference. As a result, any agenda for sustainable developmental goals remains only an outline, and nearly impossible to implement. So, what will happen to the abatement of global poverty? Whether it will remain an elusive hypothesis or become a reality, only time will tell. But what can be said conclusively is that although 2030 seems a long way off, global poverty, with no solid solution in view, is unlikely to end and will continue to be a matter of concern.